Seth Godin wrote a blog post yesterday about the half-life of a book’s sales cycle.  And it got me thinking.

I think we would all acknowledge that nothing can top the excitement that surrounds a brand new venture or goal, but what happens as time goes on?  Can our excitement towards our goals be described in terms of a “rate of decay?”

I say yes, and I believe that some of the same rules governing scientific rates of decay can be applied here.  Take a look at the following graph, that I totally didn’t make up: 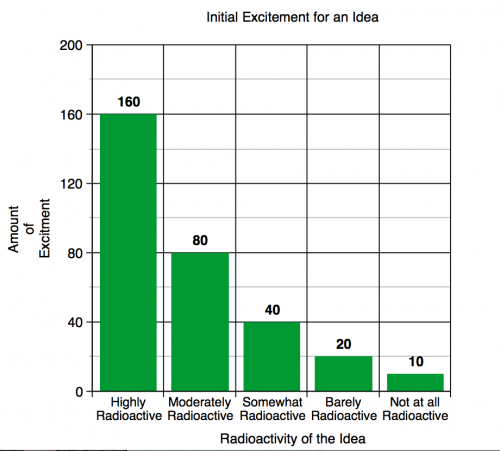 This unit of measure shall heretofore be known as "Foxes"

Despite the unscientific nature of the graph, I’m sure most would agree with its conclusions.  The more radioactive/profound an idea or goal, the higher your initial excitement for it.  Additionally, it can probably be said that the rate of decay is directly proportional to the radioactivity of a concept.

Think back to all the times you’ve had a “HUGE” idea, and then how quickly you burnt out over it.  Then think to all those tiny, musing thoughts you have about how to improve your washing machine or making a microwave that you can put metal in.  The latter tend to be the ones that stick around longer in your mind, despite your low level of initial excitement over them.

This is exactly the same way it is in science.  The radioactivity is actually the measure of the rate of decay of an atom.  It may start out as an extremely radioactive particle but it will also fizzle out sooner.

What This Means For You

All things naturally decay.  It’s the law of entropy, but everything decays at different rates.  As you move towards your goals, it’s important to reflect on just how big or “radioactive” your ideas are and prioritize them accordingly.  You can always go back to your smaller, musing ideas, but the radioactive ideas, like a nuclear reaction, need to be tended to before they melt down.

If you have an idea for a hover car or something similarly grandiose, you might want to start achieving small goals in that vein in order to keep fueling the nuclear reaction inherent in that idea.  If you don’t do something now to keep fueling that reaction, it’s just going to die and you’ll be left wondering why it never got off the ground.

Have you ever had something you consider to be a radioactive idea?  If so, share it in the comments and share what went wrong.