“I think maybe we should see other people”

At some point, every entrepreneur will be confronted with the thought that his business just isn’t working out.  Most friends and family will tell you to just keep driving forward until it clicks – great change doesn’t happen overnight, after all.  Even many self-proclaimed business experts will tell you that resistance is just a test.  Sometimes it is, but more often than not it’s a sign that things just aren’t working out.

So how did it get to this point and how do you kill your baby without killing your business?

For most entrepreneurs, especially in their early endeavors, their process for bringing their product or service to market looks something like this: 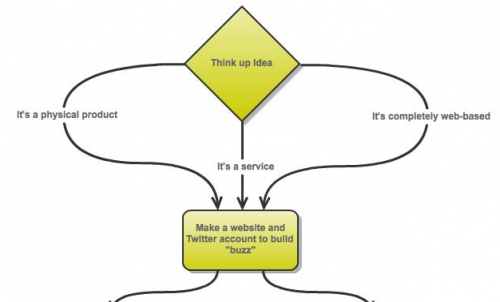 Okay, so it’s not the most serious representation of the entrepreneurial process, but if any part of that resembles your model, be afraid…be very afraid.

The more seasoned entrepreneurs out there will immediately know why this model is doomed to failure, not only does it unfairly emphasize the marketing over the product itself, but nowhere in it is the potential customer ever consulted.

If you were a car mechanic who just worked on a car before talking to its owner, you wouldn’t last very long in the trade.  So why do so many entrepreneurs think that its such a good idea?

Entrepreneurs, by nature, are a creative group, and like other creatives, such as artists, they often feel like their vision supersedes reality.

There are people reading this right now saying “What does he know?!  My product is so revolutionary/magical/problem-solving that I can’t risk having it stolen by doing research!”

Do NOT fall into this trap.  The more revolutionary your product is, the more you have to do market research.  Since there is not already an established need, there is no way to tell whether the public will be as receptive to it as you hope they’ll be.

Often, if you go through the process of researching, you’ll find that the product or service you wanted to offer isn’t the one your customers want.

This is a trap I fell into early in my entrepreneurial career.  At 18, while enrolled at a university, I designed stage magic and illusions for magician. (Yes, really! I’m THAT kind of a nerd.)  I immediately started trying to find a way to leverage that to make the most money possible, and I decided to do something that many other successful illusion designers had done: write a book.

So, I compiled original designs, and worked my ass off to create a revolutionary book on illusion design.  The only problem?  I was still a nobody in the field.

Had I been listening to my market, I would have found that my clients didn’t want a book from me…at least not yet.  They wanted me to do custom work for them.  But I wouldn’t listen, I knew what the market really wanted.  So I motored on, passing on potential clients to spend more time honing and refining my book.

Then three years into it, I lost the entire book to a hard drive crash.  I had no clients anymore to fall back on, and was not about to immediately rewrite hundreds of pages from memory.  My business collapsed and I was forced to move on.

If I had listened to my customers, and asked them what they actually wanted from me, I’d might still be an illusion designer.  I also probably wouldn’t be writing this post, so my loss is your gain.  Learn from my mistakes.

So, you’ve already started down a path without consulting your target audience, what do you do?

And research isn’t just asking people if they would buy your product. (99% will say yes just to make you happy and have you leave them alone)  Real research involves trying to disprove the concept you’ve built up.

Solo entrepreneurs have a tendency to work in a vacuum which all but guarantees that that their ideas will be firmly linked to their ego, making it that much harder to change or axe them.

Asking potential customers to compare your product to other products that exist, then ask them how often they actually use that product is one of the simplest ways to de-ego your idea.  If people aren’t using similar products, or wouldn’t use your product instead of an alternative, it should tell you that the market is saturated or there just isn’t a need for yours.  That’s when you ask, what could be added to your product to make it more desirable, or what other product the customer might want instead.

This is how real market research is done and it’s exactly what you should do if you want to see your product succeed.

This is the first time I’m laying out my exact market research technique I used to launch my hair care line.

Any market research is better than none, but not all is created equal.  The technique I personally use, is called the “Two-Pronged Approach.”

As the name implies it involves trying to disprove your concept in two separate ways.

No this doesn’t mean that you simply ask two different people.  It would be nice if things were that simple.

When I decided to start a hair care line, I knew NOTHING about the industry, so I relied on my market research to establish what I needed to create.

First I spoke with salon owners, buyers, and stylists asking them what some of their most popular products were, then I asked them what their ideal product would be, what they hated about the products currently in the field, and what premium if any they would pay for a product that would do these things.

A few words kept popping up in this phase; Natural, modern, cool, good smell, effective. (Coincidentally the same traits I’m looking for in a girlfriend…call me)

So I took this list to manufacturers and saw if they were getting a large demand for products that matched those descriptions, even asking about the frequency of reorders.

So, having a direction defined by two separate prongs of research and moved ahead with development.

Once I had a few formulas created, it wasn’t time to start selling, it was time for yet another two-pronged test.

So, I took the samples and gave them to normal consumers and salon professionals, along with a survey asking them to rate the various qualities of my products as well as compare it to what they already used. (And even suggest scents)

The two prongs were the consumer and professional tests.  It doesn’t mean much if a salon buys a product but the consumer doesn’t want it.

So with the research done, it was time to finalize the formulas and packaging design. (All tested)  Only then did I bother creating a website.

It might be hard, but destroying your business might actually be the best way to make it as successful as possible, by allowing it to become what the market really wants, rather than what you want the market to want.

Whenever possible, use research to destroy your business before you spend a cent on it, but if you’ve already started going down the wrong path, it’s important to be able to de-ego yourself enough to be able to call it quits before things get too far along.

If your business isn’t working out, it may be time to grit your teeth and tell your business model, “it’s not me, it’s you,” and move on with your life and business.

…come to think of it, they’re not that different.