We’ve all thought it: “If only I could just get a raise!”

Raises are held out as some elusive gift bequeathed to you by the benign-but-irrational gods of the office.  You sit there watching yourself get passed over for raises by people you know do less than you.  Perhaps you’ve even asked your boss for a raise and was told it wasn’t “the right time” or even the dreaded, “Everyone is paid the same amount based on seniority/title/tea leaves/etc.”

BULLSHIT!  People are paid based on their value…and that’s the problem.  Employees think their employers should value all the wrong things.  Today, I’m going to break you of this mindset and show you exactly what to do to get a raise at work!

Let’s start by addressing some of the more common myths…

Myth 1: Just be confident and tell your boss you deserve a raise

I call this The Gretzky because it finds it’s footing in the “You miss 100% of the shots you don’t take” philosophy he’s so popular for.  Other so-called experts simply tell you that if you walk into your boss’ office and tell him that you deserve a raise and don’t flinch/look him in the eye/establish dominance, that he’ll respect that and give you a raise out of respect.

But even if that technique works, is that really what you want; hush money?  Do you want your boss to just pay you to shut you up and take your boldness out of his office?  Of course not!  And even if you do, I hope you’re alright with it being a one-time thing, because the next time you try it, your boss is more likely to show you the door to shut you up.

You want to be paid more because you deserve more.  To do that, you need to prove you’re worth more.

Myth 2: The people who get raises just walk in and get them

It’s very easy to villainize those who get promotions or raises ahead of you, rather than trying to examine why they’re succeeding where you’re not, and trying to emulate them.  That’s where this idea that the best paid employees just walk into the boss’ office one day and walk out with a raise.  It’s easier to dismiss it as some instantaneous voodoo than it is to try to formulate a definite plan.

The truth is that the real work with getting a raise happens days, weeks, and months before you ever step through that door.  You need to prime your boss to recognize your value before you ever need him to.  Think about it this way: are you more likely to buy a product that is shoved in your face as you walk down the street, its benefits shouted in your face OR one that you’ve seen TV commercials for, read reviews of, and have heard recommendations for from friends?

Of course it’s the second!  Not only is it more effective, but this type of softer selling (note I did not say “soft selling) is easier to do because it means by the time you want to sell your product – namely yourself – all the marketing is already done for you. 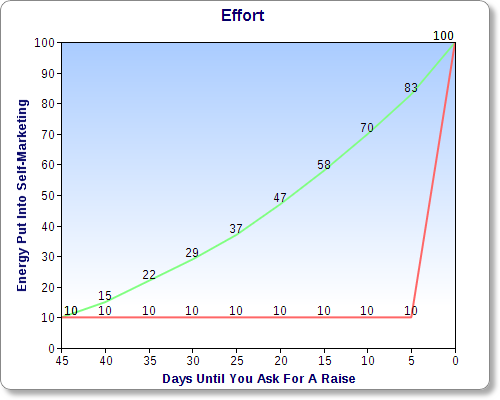 Seriously, which of these looks easier to do?!

Myth 3: They want you to share the company’s “core values”

I don’t know why this is such a problem, but it’s an attitude I see in clients ALL. THE. TIME.  For some reason, they believe that if they rattle off how they are helping the company align themselves with the core values listed in the corporate mission statement or on the company website that their boss with appreciate that.  Let me break you of this mentality: nobody cares about corporate values.  Seriously.

They are part of a company’s marketing, plain and simple.  And like all marketing, they should be kept outward-facing to the rest of the world, not inward facing.

Your boss doesn’t care that you want to foster a culture of unity.  He doesn’t care that you promote social justice through your efforts.  All he cares about is the same thing you care about: getting his boss to stop breathing down his neck.  That attitude goes all the way to the top, and at the very top, what does the big boss/board of directors/investors want?

So those are exactly what you should focus on too because marketing works best when you put what your offering into terms that demonstrate how your value is useful to your customer.  Increased team unity isn’t going to help your division (and by extension, your boss) make your money, instead tell him about all the things you’ve done to save money, make money, increase efficiency, decrease the time/effort/whatever required to get a set project done.  That is what he wants to hear, and those accomplishment are what will get you a raise.

What to do from here

1) Go back over what you’ve done and accomplished so far this year and write it all down. (If your boss ever acknowledged something you did in an email, SAVE IT!)

2) Practice telling these accomplishments in short, descriptive stories that focus on the value (read: money) you added to the company through your efforts.

3) As you have new accomplishments appear, find reasonable opportunities to talk about them.  If you have weekly meetings where you’re asked to present on what you’ve been working on, this is a good opportunity.  If you see an easier to solve problem coming down the pike that you know your boss will care about, pop your head into his office to “give him a heads up about it and that you’ll be taking care of it.”  Then once you finish it and it ends well, tell him to “catch him up” including some sort of value statement at the end demonstrating how much of a success it was for your team/the company.

4) When it IS time for your performance review let your boss know in advance that you want to talk about some of the accomplishments you’ve had over the past year, your goals for the year ahead, and that you want to discuss your compensation level.  This way, he won’t be surprised when you start talking about it.  Make sure it’s the last point you mention, once you’ve already done the legwork of telling him how awesome you are.

5) Recognize that compensation isn’t just pay.  You might not be able to get your boss to budge on your salary, but there may be other benefits that he can offer to you to sweeten your deal.  So instead of feeling defeated the next time your boss says he can’t pay you more, what if you said this:

“I completely get that, you have to pay people based on their seniority (Or other BS reason) at the firm, but I think we’d both agree that when someone does an above-average job they should receive above-average compensation.  I know that you can’t move on salary, but you know the year I’ve had, so what else could you do to help my package better reflect what I’ve accomplished here?”

By framing it that way, you immediately put him by putting him on your side, by telling him you understand and agree with him, then add a slight wrinkle by adding a statement he’s likely to agree with: when someone does an above-average job they should receive above-average compensation.

So, now that you know what it takes to get a raise, will you ever look at performance reviews the same way again?

Feel free to share some of your best and worst stories about trying to get a raise.  I’ve heard a few doozies, but you’re welcome to see if you can make me cringe harder than I already have.