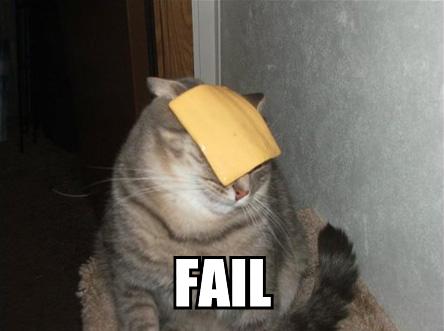 Failure...it happens to the best of us.

While talking with a friend today about a goal of his, I was reminded that if we’re going to talk about success, we inevitably have to talk about failure too.

…I know, it’s not a pretty subject, and it’s never fun to dwell on our failures, but maybe we should.

With the popularity of sites such as Failblog and the ubiquity of the internet meme “FAIL” it’s no wonder that fewer and fewer people own up to their failures anymore.  I’m here to say that it’s not about how you define your failures, but rather how you let them define you.

To put it another way, we need to redefine our ideas of success.

Those in the highest positions, and those we consider to be the most successful, are not there because they are immune to failure, but rather because they see failure as a beginning, rather than an end.  And this distinction all comes down to the two main types of goals we set:

These are the goals most of us are familiar with from our academic and professional lives.  Performance goals involve laying out a specific end goal you want and working towards it.  Let’s look at a little hypothetical situation…

Edward (Only because I’ve never met an Edward…that I can remember) has just started a consulting businesses.  He has done all of his homework and has a whole list of leads to pursue for potential consulting work.  He has decided that at the end of 3 months he wants to have 6 permanent clients.

After 3 months, despite having been profitable and putting his heart and soul into the effort, Eddie (I made him up, so I can give him a nickname if I want) only has 3 permanent clients.  Simply put, he has failed and because of that he is more likely to put less effort into any future endeavors, setting him up for further failures down the line.

As you can see, the problem with Performance Goals is that they force an artificial end onto what should be an organic process, causing you to focus more on the ends rather than the means.

This is the other side of the coin.  Through Mastery Goals, you don’t seek to impose any artificial end or result onto your efforts, but rather allow your efforts to become part of the goal themselves.  Lets go back to our old friend Eduardo…

Eddie, having just started his consulting firm and gotten his list of prospects together is a bit at a loss of where to begin.  He knows he can do quality work, but knows very little about selling.  So, he decides to make it a goal of his to master closing a deal with clients (Permanent or one-off) at the end of 3 months.

After 3 months, he’s managed to close 3 permanent clients, and even more one-off customers…he also had 20 clients that he couldn’t close.  However, instead of letting these apparent failures bring him down, he compares them to the instances where he was successful.  In doing so he can see times where the failure to close was his fault and how to correct it next time, and some times where the client would have never closed no matter what he did.

So, now, not only has Edward reframed his failures as a lens to view and analyze his success, he has armed himself with the tools to refine his skills in closing and choosing customers so that he can set another Mastery Goal.

Yes, it’s important to have some performance-based goals, but if you still have a lot to learn about the goal you are trying to accomplish, then put them off for the time being.  It takes the pressure off of you to be perfect and helps you better-define realistic performance goals.  And when things don’t go exactly your way, use a new Mastery Goal to help refocus your direction.  Using Mastery Goals is a great way to drive your first hand research, and once you know what your market looks like set some performance goals…and achieve them!

Let me just leave you with this quotation from professional Golfer Tom Watson:

If you want to increase your success rate, double your failure rate.

So, get out there and fail…and if you’re in a sharing moment, let me know some of the ways you feel you’ve failed in the last year and what you could have done to overcome that feeling.